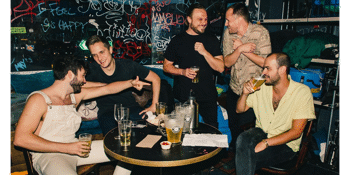 
Australian Indie Rock lords Bad Pony are hitting venues on the east coast to celebrate the release of a spattering of horror-inspired singles, including their latest ‘Freddy Krueger’

After playing to packed out venues across Texas at SXSW in 2018, Bad Pony’s explosive live show earned such praise from SXSW as "next in line to break out" as well as the award for ‘Best Australian Group’, as voted by The AU Review after playing Sounds Australia’s ‘The Aussie BBQ’ at the inaugural Australia House Showcase alongside national legends Gang of Youths.

Bad Pony have spent the last few years carefully crafting their debut album, which is set for release later this year. Catch them at a venue near you, joined by musical friends old and new, while they slay the stage and likely butcher new cuts from the forthcoming album.


“A totally energizing hit from bad pony, those hooks are red blood cell boosters. If you have a soft spot for Foals or Kasabian then you are missing out if you're not blasting this one.”
Declan Byrne – Triple J on ‘Freddy Krueger’